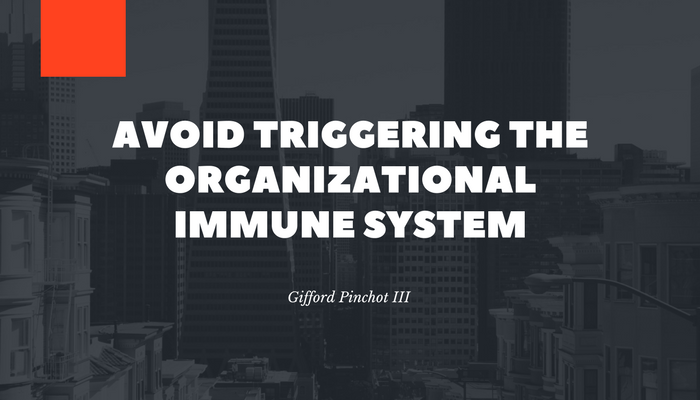 An intrapreneur in the grip of an idea often sees the grand potential of it in the many different innovations it makes possible. You are thrilled by the overall significance of it and the huge difference the idea and its children can make for the company. In selling it, you are tempted to say something that implies, “This will change everything.” You are tempted to tell everyone about it and the massive benefits that will come from it.

That is exactly the wrong message.

When a manager hears this, at some level it scares the heck out of them. They don’t want everything changed. They have a good job they want to keep. They have deliverables and don’t want resources pulled away from what they are being held accountable for. And they don’t want any big failures or turf wars that can be traced to them. They like things more or less the way they are, only a bit better.

The organizational immune system exists to stamp out ideas that are too different. Even if your idea is actually quite different, and we hope it is, don’t make it sound very different from what is already going on. It is just a new way of supporting an existing strategy or strategic intent.

This section of my blog series will continue next Monday with more on how to avoid triggering the organizational immune system.

Next Monday’s post will be on what I call, “It’s Only a Test” strategy.