Framing Ideas so they Get Support 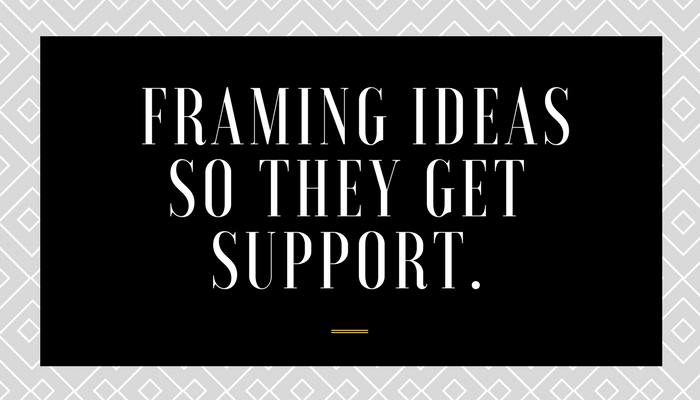 Watanabe San, an engineer at NEC who had been assigned to selling microcomputers, was getting nowhere. This was several years before the first IBM PC and people could not imagine what microprocessors were for. To solve this problem he built a small computer to demonstrate an example of what microprocessors could do.

His boss was not pleased, because he thought sales were driven by number of sales calls that you make. Nonetheless, he let Watanabe San present the idea to NEC’s computer division. They laughed. The computers they were building filled a room. In their minds, the little computer was at best a toy.

Watanabe San did not give up. He went to the household products group and showed them what he had. He imagined new hobby clubs of engineers, who would play with the computer, build extensions to it and eventually design products that used the microprocessors that NEC had created. He was not well received in household products. This was not the kind of market they knew anything about.

At this point his boss lost patience. “You engineers are all the same,” he said. “You no sooner are given a sales job than you try to turn it into an engineering one. Stop working on the computer and go out and make sales calls.”

At this point Watanabe San did something unexpected. He took apart the computer, put it in a bag, put in instructions on how to re-assemble it, took out a magic marker and wrote “Sales Tool” on the outside of the bag. He went back and showed it to his boss. The result may surprise you. His boss was quite pleased, “Finally you are really working on selling microprocessors.”

Watanabe San began selling the computer in a bag and people bought them. He was surprised that the customers ranged from engineers to flight attendants and people from all walks of life. Someone added the interface for a screen, which the computer in a bag lacked. Someone else added a keyboard. The little computers grew more powerful and more useful. Sales grew. NEC became the largest manufacturer of PCs in Japan.

What this story illustrates is a very important fact: Like the human immune system, which responds to what is on the outside of a cell not the DNA inside, the corporate immune system responds to the outside of an idea, not to the essence on the inside. The inside of the idea was still a tiny computer. The outside as seen by his boss changed from a useless tiny computer to a tool for selling microprocessors, and that made it acceptable.

Positioning in marketing is about how you want the customer to see your offering. Getting the positioning right plays a major role in success. When seeking approval, and even in making sales to customers, intrapreneurs must pay attention to the power of the outside positioning of their idea. Later the internal essence matters to its usefulness and longevity in the market, but much less to whether it will be approved.

Spend time designing the outside of your idea so it does not threaten the corporate immune system and has an appeal to those whose support you need. The name and the elevator pitch may be all most deciders hear. Craft and test them carefully.

Rename and Press On

And when all else fails and your idea appears to have been definitively killed, rename and press on. This, in essence is what Watanabe San did. He renamed his computer project. A new name very often disguises the continuity of the effort and gives you a new start.

Next Monday we will post on a strategy called, “Restarting the Clock.“